The arterial supply to the upper limb is delivered via five main vessels (proximal to distal):

In this article, we shall look at the anatomy of the arteries of the upper limb – their anatomical course, branches and clinical correlations. 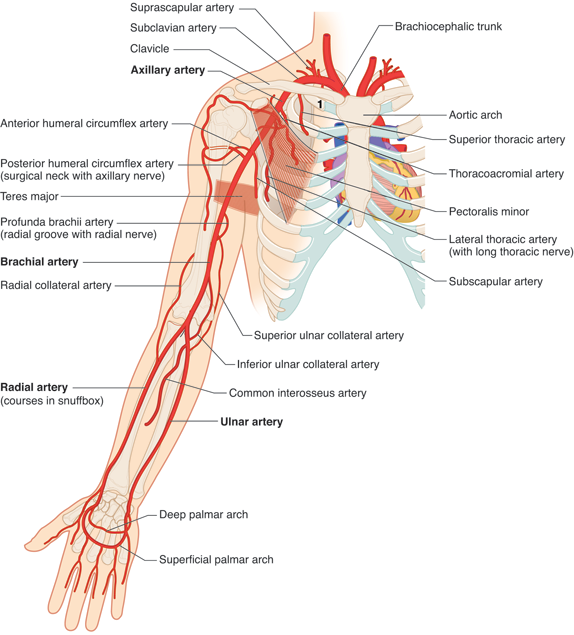 The subclavian artery travels laterally towards the axilla. It can be divided into three parts based on its position relative to the anterior scalene muscle:

At the lateral border of the first rib, the subclavian artery enters the axilla – and is renamed the axillary artery.

The axillary artery lies deep to the pectoralis minor and is enclosed in the axillary sheath (a fibrous layer that covers the artery and the three cords of the brachial plexus).

Importantly, the artery can be divided into three parts based on its position relative to the pectoralis minor muscle:

The main branches of the axillary artery include:

The anterior and posterior circumflex humeral arteries form an anastomotic network around the surgical neck of the humerus and can be damaged in cases of fracture.

At the lower border of the teres major muscle, the axillary artery is renamed the brachial artery.

An axillary artery aneurysm is a dilation of the vessel to more than twice its original size. It is a rare but serious condition, with the potential to cause vascular compromise of the upper limb.

The dilated portion of the axillary artery can compress the brachial plexus, producing neurological symptoms such as paraesthesia and muscle weakness.

The definitive treatment of an axillary artery aneurysm is surgical. It involves excising the aneurysm and reconstructing the vessel wall using a vascular graft.

The brachial artery is a continuation of the axillary artery past the lower border of the teres major. It is the main supply of blood for the arm.

Immediately distal to the teres major, the brachial artery gives rise to the profunda brachii (deep artery), which travels with the radial nerve in the radial groove of the humerus and supplies structures in the posterior aspect of the upper arm (e.g. triceps brachii). 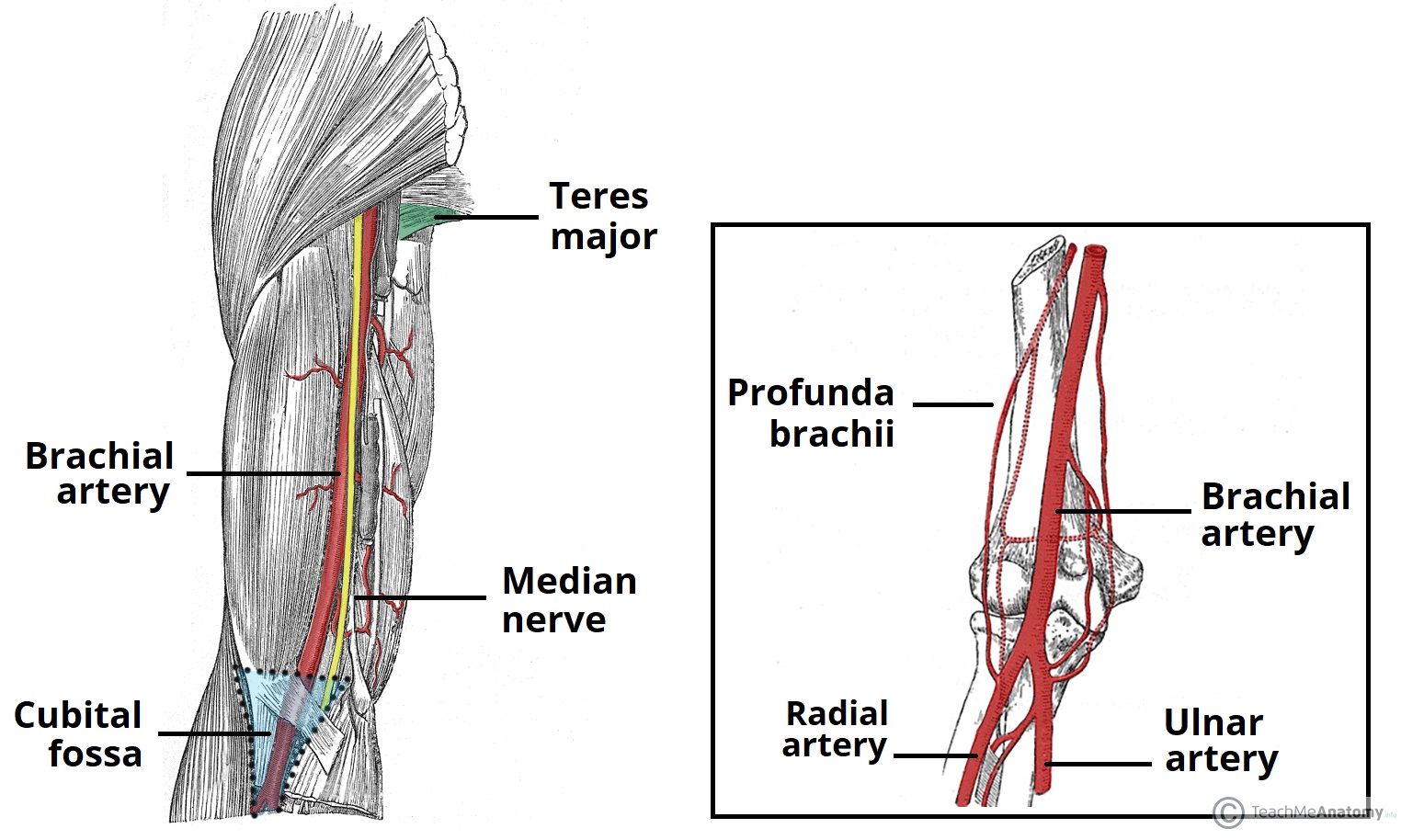 The profunda brachii terminates by contributing to an anastomotic network around the elbow joint.

Clinical Relevance: Occlusion or Laceration of the Brachial Artery

The arm has relatively good anastomotic supply. This means that it is well protected from ischaemia in cases of temporary or partial occlusion of the brachial artery.

However, if the artery is completely occluded (or severed), the resulting ischaemia can cause necrosis of forearm muscles.

Muscle fibres are replaced by scar tissue and shorten considerably – this can cause a characteristic flexion deformity, called Volkmann’s ischaemic contracture.

The radial and ulnar arteries are formed by the bifurcation of the brachial artery within the cubital fossa:

These two arteries anastomose in the hand by forming two arches – the superficial palmar arch, and the deep palmar arch.

The hand has a rich arterial supply with many anastomoses between vessels. This allows the hand to be perfused even when under high resistance to flow (such as when grasping or applying pressure).

Arterial supply to the hand begins with the ulnar and radial arteries. The ulnar artery enters the hand anteriorly to the flexor retinaculum and laterally to the ulnar nerve. It gives rise to the deep palmar branch and continues laterally across the palm as the superficial palmar arch.

The radial artery enters the hand dorsally, crossing the floor of the anatomical snuffbox. It then turns medially and travels between the heads of the adductor pollicis muscle.

The radial artery supplies a branch to the thumb, the index finger and to the superficial palmar arch – it then continues as the deep palmar arch.

As a result, two arterial arches are formed: