For most of us, our smartphones may as well be part of our skin, they’re in our hands so much.

So what would happen if they actually became flesh-like?

‘Ew’ is probably your first thought, but that’s exactly what Marc Teyssier and his colleagues at Telecom Paris have done by creating artificial skin for their mobile phones, which is creepily realistic and flesh-like. Oh, and it can feel your touch, too.

‘I wanted to pinch my phone,’ Teyssier told New Scientist.

The bizarre phone case, which covers the back of the phone, has a squishy interface that when plugged into a computer can be used as a laptop touchpad or a remote control for all the typical touch commands, such as tapping to select, sliding to scroll or pinching to zoom in and out.

What’s probably most unusual about the smartphone skin is the fact it also functions when touched on the reverse. This means a range of different finger motions will provoke certain emotions, for example stroking, which is supposed to emulate comfort.

The inventors have come up with two prototypes. One has a smooth surface and another has much more human-like texture. The functionality of the case comes from a malleable electromagnetic copper wire, which is hidden between two layers of stretchy silicone. 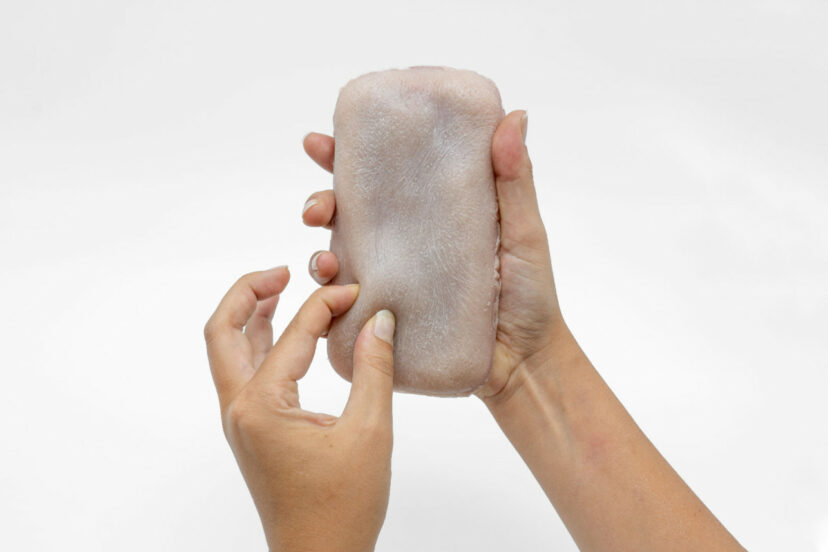 He will present his work at this week’s ACM User Interface Software and Technology Symposium in New Orleans, LA, but this isn’t his first piece of lifelike tech.

Last year he created a robot finger called MobiLimb, which attaches to your phone and can crawl across a flat surface. Creepy.

Having already developed the skin for phones, smartwatches and computer touchpads, the tech engineers are now focusing on making the skin even more realistic, with heat sensors and peach fuzz.
Although they haven’t quite explained how people will use the smartphone skin for day-to-day application, it’s easy to see where fleshy technology fits into the sex toy industry.