The rectum is approximately 15cm long, and begins at the level of the S3 (as a continuation of the sigmoid colon). It is macroscopically distinct from the colon, with an absence of taenia coli, haustra, and omental appendices. The course of the rectum is marked by two major flexures:
There are additionally three lateral flexures (superior, intermediate and inferior), which are formed by transverse folds of the internal rectum wall.
The final segment of the rectum, the ampulla, relaxes to accumulate and temporarily store faeces until defecation occurs. It is continuous with the anal canal; which passes through the pelvic floor to end as the anus.

In the superior third of the rectum, the anterior surface and lateral sides are covered by peritoneum. The middle third only has an anterior peritoneal covering, and the lower 1/3 has no peritoneum associated with it.
In males, the reflection of peritoneum from the rectum to the posterior bladder wall forms the rectovesical pouch. In females, the peritoneum reflects to the posterior vagina and cervix, forming the rectouterine pouch (pouch of Douglas)

The rectum is located within the pelvic cavity, and is the most posterior of the pelvic viscera. Its anatomical relations are different in men and women:

Blood supply to the Rectum 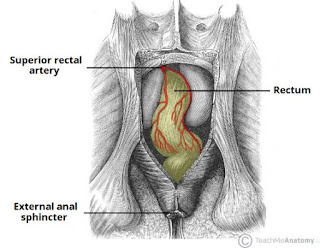 Lymphatic drainage of the rectum is via the pararectal lymph nodes, which drain into the inferior mesenteric nodes.
Additionally, the lymph from the lower aspect drains directly into the internal iliac lymph nodes.

The anterior wall of the rectum has a number of close anatomical structures. These can therefore be palpated digitally via the rectum.
Most significant are the prostate and seminal vesicles in males, and cervix in females. Bony structures, such as the sacrum and coccyx, may also be palpated in both sexes. 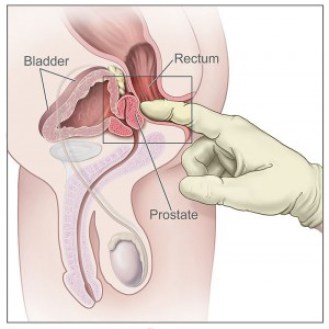