With at least 3,602 confirmed cases and 66 deaths from coronavirus-related illness reported in the United States, the World Health Organization has officially announced that the coronavirus has become a pandemic.

As with any pandemic, people have been on high alert, postponing travel plans and practicing social distancing to try to prevent themselves from contracting the virus. But as more cases are reported each day, more misinformation and wide-spread panic have contributed to racially motivated attacks on people of Asian descent or anyone who looks East Asian.

Hate crime task forces have been responding to calls and social media users who have been posting videos and tweeting stories of attacks — both verbal and physical — that have been posted online to try to find perpetrators who’ve been targeting Asians.

Mark Holgate, a fencing teacher from Australia, said he was “ashamed to be Australian” after sharing that his student was attacked for speaking another language, and will now need “expensive facial reconstruction surgery” to prevent him from losing his eye.

“Today I’m angry and ashamed to be Australian. Three days ago a Chinese student of mine was cowardly assaulted for walking down the street speaking another language,” Holgate shared in a Facebook post on Feb. 24, 2020. “This is Constantine, and he’s one of the nicest people I’ve met, and it’s been a privilege to train and fence with him. Now that’s all over, he won’t be fencing for a long time. The coward who attacked him, spewing racist trash and telling him to speak English, smashed a huge section of his cheek bone, and he’s going to need serious and expensive facial reconstruction surgery to keep from losing the eye.”

“Constantine traveled from China to australia to learn historical fencing and this is what australia has given him. I’m just gutted for him. Well done Australia, way to encourage tourism,” he continued.

“Our country has an ugly history of racism. Challenge it and call it out. And look after your Asian friends, the corona virus is just another excuse that’s stirring up racist violence,” he added before reporting that “thankfully the assailant was stupid, coming back to the scene of the crime, and was apprehended by police.”

Holgate created a GoFundMe page to help Constantine with his medical bills. The goal was set at $6,000, and through the support of over 200 donors, he’s exceeded his goal by $2,000. 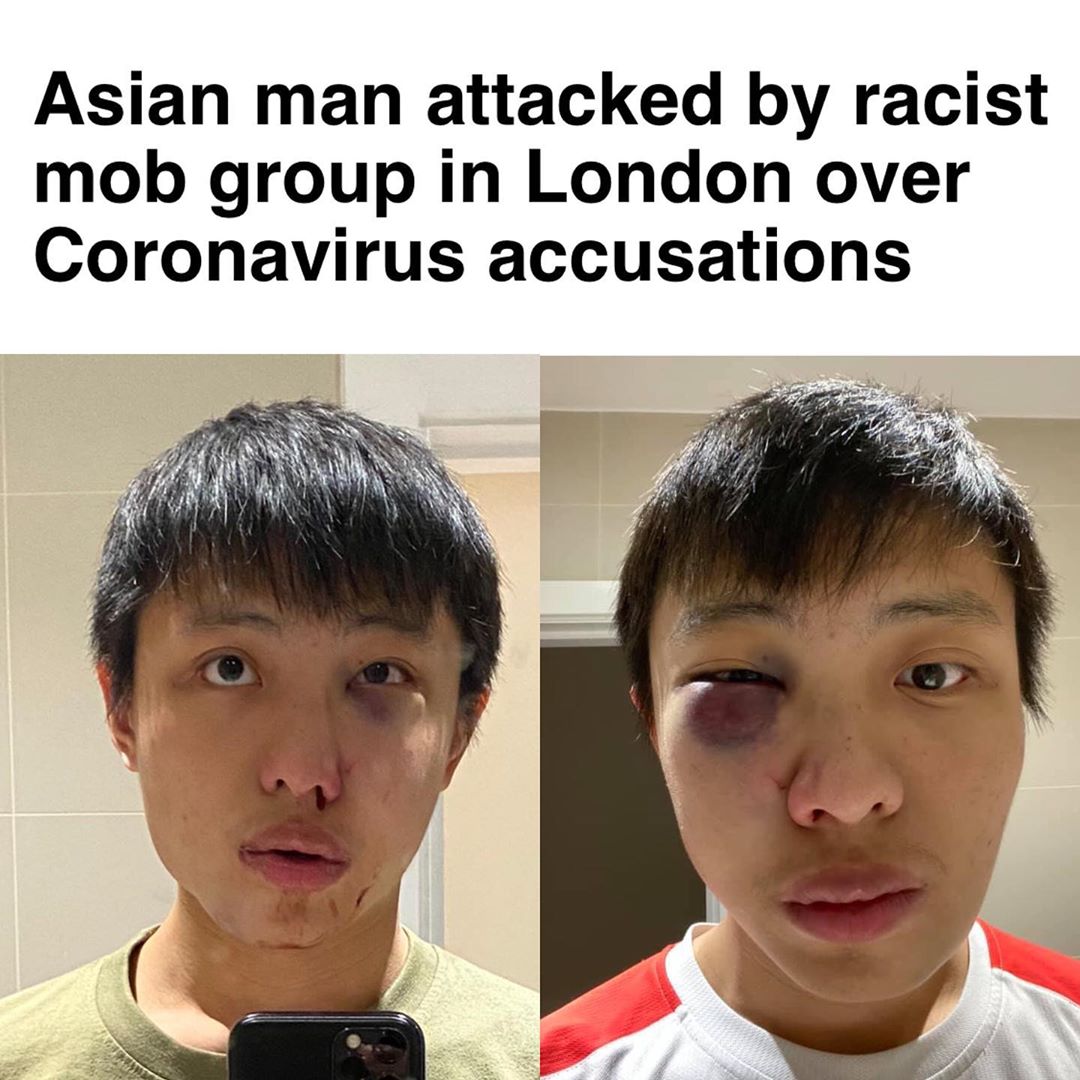 Jonathan Mok, 23, said in a Facebook post (which has now been edited, but parts of his original statement and photos were reposted by Instagram account ricefeed) that he was walking down Oxford Street, a busy shopping avenue in London, around 9:15 p.m. on Feb. 24, 2020, when he heard voices yelling “coronavirus” at him. After making eye contact with one of his harassers, the man shouted, “Don’t you dare look at me,” as he walked by.

“I was shocked and angry because he directed a racist remark at me and had the audacity to shout at me like I had wronged him,” he wrote.

Mok said that he then tried to confront the group of men, but they started beating him up, shouting, “I don’t want your coronavirus in my country.”

In an earlier Facebook post, Mok said that he was punched in the face twice and “exploded with blood,” according to The Washington Post. He also shared photos (which have since been taken down) of his injuries — facial fractures, swelling and a black eye — which doctors told him may require an operation to fix.