Primary sclerosing cholangitis (PSC) is a chronic liver disease characterized by cholestasis ,caused by progressive inflammation and scarring of the bile ducts of the liver. This inflammation impedes the flow of bile to the gut, which can ultimately lead to liver cirrhosis, liver failure and liver cancer.
The underlying cause of the inflammation is still unknown, but a variety of factors are thought to be involved. An autoimmune mechanism is suggested, since approximately 75-90% of patients with PSC have inflammatory bowel disease (IBD). 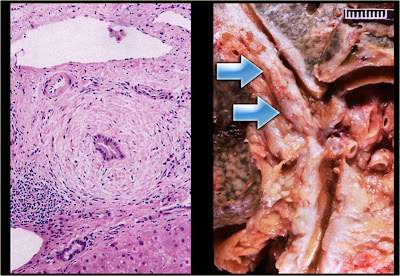 The left image shows a histologic specimen demonstrating chronic inflammation surrounding the bile duct.
The gross specimen ,the right picture demonstrates the thickening of the wall of the bile duct (arrow) causing many strictures.
Note that the strictures in PSC are short in the order of 3-5 mm in length, which is helpful to remember because if you are looking for cholangiocarcinoma, the malignant strictures usually exceed 10 mm in length. 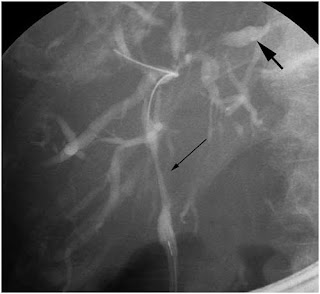 Types of Psoriasis and Coping and support

What Causes Psoriasis, triggers,prevention and more