Mid brain, it is part brain stem (also known as the mesencephalon) is the most superior of the three regions of the brain stem. It acts as a conduit between the forebrain above and the pons and cerebellum below. the midbrain also serves as an origin to cranial CNIII and CNIV
Note: we will discuss the anatomy of the midbrain – its external anatomy, internal anatomy, and vasculature of the midbrain.

Midbrain as an origin of cranial nerves

External Anatomy of the Mid brain

The mid brain is the smallest of the three regions of the brainstem, measuring around 2cm in length. As it ascends, the mid brain travels through the opening in the tentorium cerebelli.

It can be divided into two main parts:

The tectum houses four rounded prominences named colliculi (mid brain)(collectively the corpora quadrigemina) which sit directly inferior to the pineal gland. The colliculi are separated by the cruciform sulcus; there are two superior and two inferior colliculi.
Extending laterally from each colliculi are the quadrigeminal brachium:

Inferior to the colliculi, the trochlear nerve (CN IV) emerges before sweeping across to the anterior surce of the mid brain.

The paired cerebral peduncles extend from the cerebral hemispheres to converge as they meet the pons towards the midbrain. They are separated anteriorly in the midline by the interpeduncular fossa, the floor of which is termed the posterior perforated substance (as many perforating blood vessels can be identified).

The oculomotor nerve (CNIII) is seen exiting from between the peduncles while the optic tract runs around the superior border of the mid brain.

Internal Anatomy of the Midbrain

Level of the Inferior Colliculus

The anteriolateral surface of the mid brain houses the paired crus cerebri. Four fibre tracts run within the crus:

Posteriorly surface of the mid brain is the substantia nigra – a pigmented nucleus that separates the two regions of the cerebral peduncles. It is further broken down into the pars reticulata (anterior) and pars compacta (posterior).

The tegmentum of the midbrain is located posterior to the substantia nigra. It is continuous with that found in the pons by the same name. It is important to note that unlike the crus cerebri, the tegmentum is continuous at the midline.

The cerebral aqueduct is a midline structure surrounded by central gray matter – the periaqueductal gray matter. Within this gray matter lies the mesencephalic nucleus of the trigeminal nerve, as well as the trochlear nucleus with its fibres continuing around the gray matter to exit the mid brain. Anterior to this, the medial longitudinal fasciculus can be seen.

The decussation of the superior cerebellar peduncles can be seen centrally at this level with some reticular formation (noted throughout the brain stem) lying lateral.

Between the central gray matter and the substantia nigra are four lemnisci. Moving anterior to posterior they are the medial, spinal, trigeminal, and lateral leminisci.

At the very posterior pole, we find the tectum which, at this level, contains the inferior colliculus. 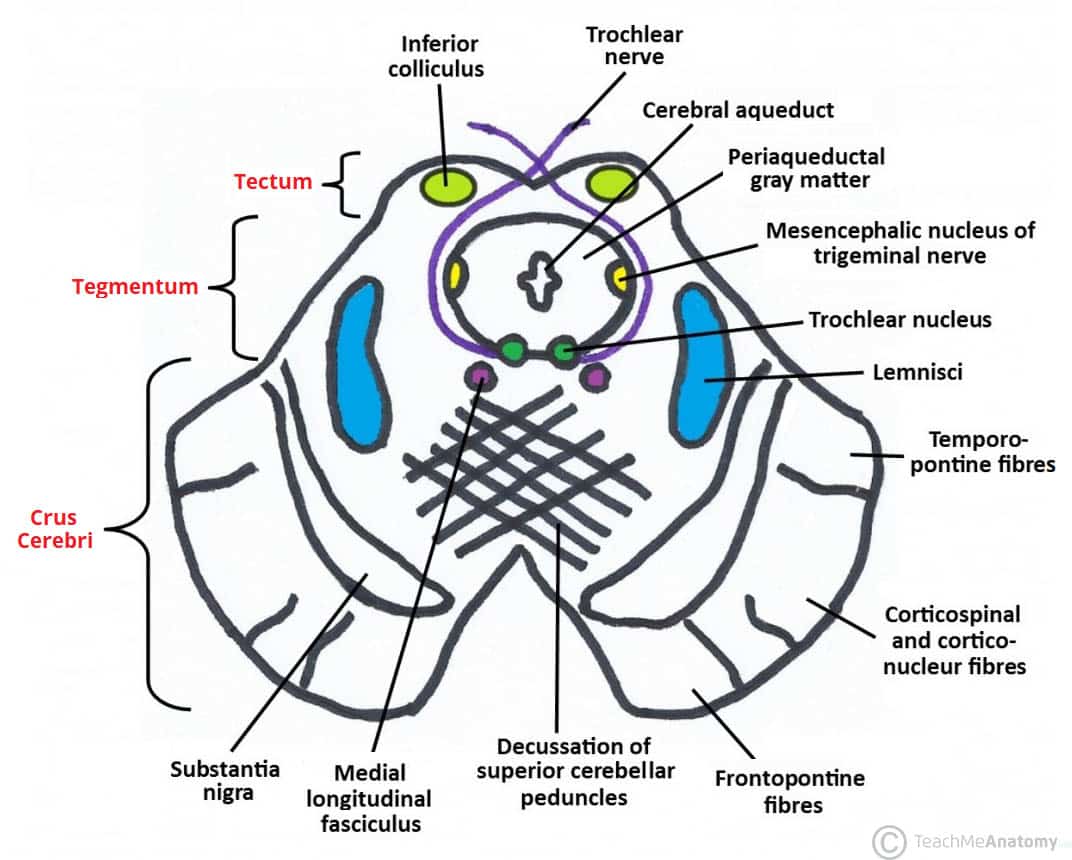 Level of the Superior Colliculus

Much of the internal structure of the mid brain is unchanged at this level and should be assumed present unless mentioned below.

The central portion which previously was occupied by the decussation of the superior cerebellar peduncles now contains the large paired red nuclei with some decussation of the rubrospinal tract occuring anterior to this. The reticular formation now fans around the posterior borders of the red nuclei. The trochlear nucleus is replaced with the oculomotor nucleus while the oculomotor nerve projects anteriorly.

The medial, spinal and trigeminal lemnisci are all present in much the same location however the lateral lemnisci does not reach to this level. Needless to say, the tectum now contains the superior colliculi rather than the inferior colliculi.

The mesencephalon is considered part of the brain stem. Its substantia nigra is closely associated with motor system pathways of the basal ganglia. The human mesencephalon is archipallian in origin, meaning that its general architecture is shared with the most ancient of vertebrates. Dopamine produced in the substantia nigra and ventral tegmental area plays a role in movement, movement planning, excitation, motivation and habituation of species from humans to the most elementary animals such as insects. Laboratory house mice from lines that have been selectively bred for high voluntary wheel running have enlarged midbrains. The midbrain helps to relay information for vision and hearing.

Problems Only intelligent and Smart People Have

Intelligent and smart people get distracted so easily, why?