Posteroanterior radiograph shows a multitude of fairly well-circumscribed nodules and masses ranging in diameter from 1 to 5 cm, scattered randomly throughout both lungs with no notable anatomic predilection. No cavitation is apparent, and there is no evidence of calcification. 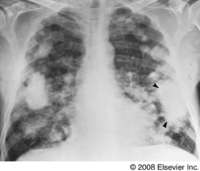 This patient, a 56-year-old man, had been a coal miner for many years and in recent years had developed arthralgia, which proved to be due to rheumatoid arthritis. As a means of establishing the nature of the pulmonary nodules, a percutaneous needle aspiration was performed on the large mass situated in the lower portion of the left lung (arrowheads): Several milliliters of inky black fluid were aspirated.