Overview of the brain

The brain is an amazing three-pound organ that controls all functions of the body, interprets information from the outside world, and embodies the essence of the mind and soul. Intelligence, creativity, emotion, and memory are a few of the many things governed by the brain. Protected within the skull, the brain is composed of the cerebrum, cerebellum, and brain stem.

The brain receives information through our five senses: sight, smell, touch, taste, and hearing – often many at one time. It assembles the messages in a way that has meaning for us, and can store that information in our memory. The brain controls our thoughts, memory and speech, movement of the arms and legs, and the function of many organs within our body.

Anatomy of the Brain

The brain is composed of the cerebrum, cerebellum, and brain stem: 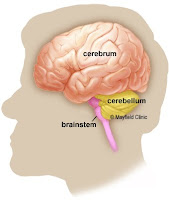 Cerebrum: is the largest part of the brain and is composed of right and left hemispheres. It performs higher functions like interpreting touch, vision and hearing, as well as speech, reasoning, emotions, learning, and fine control of movement.

Cerebellum: is located under the cerebrum. Its function is to coordinate muscle movements, maintain posture, and balance.

Brainstem: acts as a relay center connecting the cerebrum and cerebellum to the spinal cord. It performs many automatic functions such as breathing, heart rate, body temperature, wake and sleep cycles, digestion, sneezing, coughing, vomiting, and swallowing. 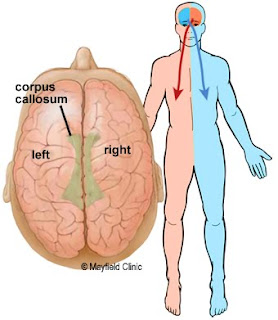 The cerebrum is divided into two halves: the right and left hemispheres. They are joined by a bundle of fibers called the corpus callosum that transmits messages from one side to the other. Each hemisphere controls the opposite side of the body. If a stroke occurs on the right side of the brain, your left arm or leg may be weak or paralyzed.

Lobes of the brain

The cerebral hemispheres have distinct fissures, which divide the brain into lobes. Each hemisphere has 4 lobes:

Each lobe may be divided, once again, into areas that serve very specific functions. It’s important to understand that each lobe of the brain does not function alone. There are very complex relationships between the lobes of the brain and between the right and left hemispheres.

In general, the left hemisphere of the brain is responsible for language and speech and is called the “dominant” hemisphere. The right hemisphere plays a large part in interpreting visual information and spatial processing. In about one third of people who are left-handed, speech function may be located on the right side of the brain. Left-handed people may need special testing to determine if their speech center is on the left or right side prior to any surgery in that area.

Aphasia is a disturbance of language affecting speech production, comprehension, reading or writing, due to brain injury – most commonly from stroke or trauma. The type of aphasia depends on the brain area damaged.

Broca’s area: lies in the left frontal lobe. If this area is damaged, one may have difficulty moving the tongue or facial muscles to produce the sounds of speech. The person can still read and understand spoken language but has difficulty in speaking and writing (i.e. forming letters and words, doesn’t write within lines) – called Broca’s aphasia.

Wernicke’s area: lies in the left temporal lobe. Damage to this area causes Wernicke’s aphasia. The individual may speak in long sentences that have no meaning, add unnecessary words, and even create new words. They can make speech sounds, however they have difficulty understanding speech and are therefore unaware of their mistakes.