The upper limb is divided into three regions. These consist of the arm, located between the shoulder and elbow joints; the forearm, which is between the elbow and wrist joints; and the hand, which is located distal to the wrist. There are 30 bones in each upper limb

The humerus is the single bone of the upper arm region . At its proximal end is the head of the humerus. This is the large, round, smooth region that faces medially. The head articulates with the glenoid cavity of the scapula to form the glenohumeral (shoulder) joint. The margin of the smooth area of the head is the anatomical neck of the humerus. Located on the lateral side of the proximal humerus is an expanded bony area called the greater tubercle.

Passing between the greater and lesser tubercles is the narrow intertubercular groove (sulcus), which is also known as the bicipital groove because it provides passage for a tendon of the biceps brachii muscle. The surgical neck is located at the base of the expanded, proximal end of the humerus, where it joins the narrow shaft of the humerus.

The surgical neck is a common site of arm fractures. The deltoid tuberosity is a roughened, V-shaped region located on the lateral side in the middle of the humerus shaft. As its name indicates, it is the site of attachment for the deltoid muscle.

The distal end of the humerus has two articulation areas, which join the ulna and radius bones of the forearm to form the elbow joint. The more medial of these areas is the trochlea, a spindle- or pulley-shaped region (trochlea = “pulley”), which articulates with the ulna bone.

Immediately lateral to the trochlea is the capitulum (“small head”), a knob-like structure located on the anterior surface of the distal humerus. The capitulum articulates with the radius bone of the forearm.

Similarly, the posterior humerus has the olecranon fossa, a larger depression that receives the olecranon process of the ulna when the forearm is fully extended.

This region articulates with the trochlea of the humerus as part of the elbow joint. The inferior margin of the trochlear notch is formed by a prominent lip of bone called the coronoid process of the ulna. Just below this on the anterior ulna is a roughened area called the ulnar tuberosity.

To the lateral side and slightly inferior to the trochlear notch is a small, smooth area called the radial notch of the ulna. This area is the site of articulation between the proximal radius and the ulna, forming the proximal radioulnar joint. The posterior and superior portions of the proximal ulna make up the olecranon process, which forms the bony tip of the elbow. 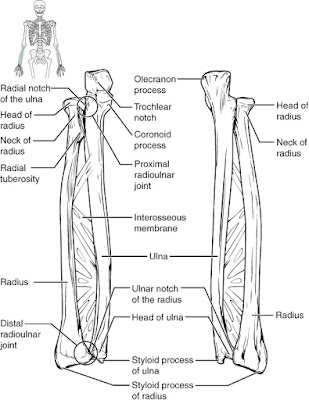 More distal is the shaft of the ulna. The lateral side of the shaft forms a ridge called the interosseous border of the ulna.
This is the line of attachment for the interosseous membrane of the forearm, a sheet of dense connective tissue that unites the ulna and radius bones. The small, rounded area that forms the distal end is the head of the ulna.
Projecting from the posterior side of the ulnar head is the styloid process of the ulna, a short bony projection. This serves as an attachment point for a connective tissue structure that unites the distal ends of the ulna and radius.
In the anatomical position, with the elbow fully extended and the palms facing forward, the arm and forearm do not form a straight line. Instead, the forearm deviates laterally by 5–15 degrees from the line of the arm.
This deviation is called the carrying angle. It allows the forearm and hand to swing freely or to carry an object without hitting the hip. The carrying angle is larger in females to accommodate their wider pelvis.

The radius runs parallel to the ulna, on the lateral (thumb) side of the forearm. The head of the radius is a disc-shaped structure that forms the proximal end.
The small depression on the surface of the head articulates with the capitulum of the humerus as part of the elbow joint, whereas the smooth, outer margin of the head articulates with the radial notch of the ulna at the proximal radioulnar joint.
The neck of the radius is the narrowed region immediately below the expanded head. Inferior to this point on the medial side is the radial tuberosity, an oval-shaped, bony protuberance that serves as a muscle attachment point.
The shaft of the radius is slightly curved and has a small ridge along its medial side. This ridge forms the interosseous border of the radius, which, like the similar border of the ulna, is the line of attachment for the interosseous membrane that unites the two forearm bones.
The distal end of the radius has a smooth surface for articulation with two carpal bones to form the radiocarpal joint or wrist joint. On the medial side of the distal radius is the ulnar notch of the radius.
This shallow depression articulates with the head of the ulna, which together form the distal radioulnar joint. The lateral end of the radius has a pointed projection called the styloid process of the radius.
This provides attachment for ligaments that support the lateral side of the wrist joint. Compared to the styloid process of the ulna, the styloid process of the radius projects more distally, thereby limiting the range of movement for lateral deviations of the hand at the wrist joint.

The wrist and base of the hand are formed by a series of eight small carpal bones. The carpal bones are arranged in two rows, forming a proximal row of four carpal bones and a distal row of four carpal bones.
The bones in the proximal row, running from the lateral (thumb) side to the medial side, are the scaphoid (“boat-shaped”), lunate (“moon-shaped”), triquetrum (“three-cornered”), and pisiform (“pea-shaped”) bones. The small, rounded pisiform bone articulates with the anterior surface of the triquetrum bone.
The pisiform thus projects anteriorly, where it forms the bony bump that can be felt at the medial base of your hand. The distal bones (lateral to medial) are the trapezium (“table”), trapezoid (“resembles a table”), capitate (“head-shaped”), and hamate (“hooked bone”) bones. The hamate bone is characterized by a prominent bony extension on its anterior side called the hook of the hamate bone.
A helpful mnemonic for remembering the arrangement of the carpal bones is “So Long To Pinky, Here Comes The Thumb.” This mnemonic starts on the lateral side and names the proximal bones from lateral to medial (scaphoid, lunate, triquetrum, pisiform), then makes a U-turn to name the distal bones from medial to lateral (hamate, capitate, trapezoid, trapezium). Thus, it starts and finishes on the lateral side. 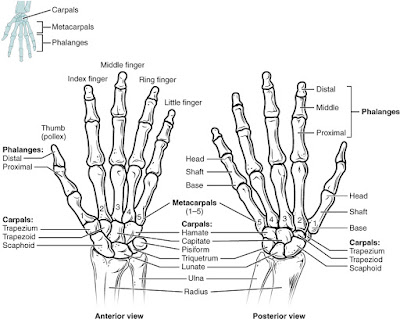 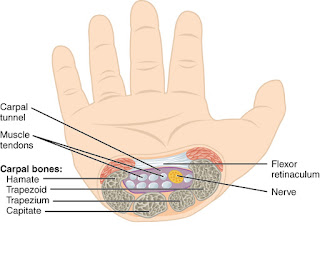 This mobility is important during power gripping with the hand . The anterior movement of these bones, particularly the fifth metacarpal bone, increases the strength of contact for the medial hand during gripping actions.

The fingers and thumb contain 14 bones, each of which is called a phalanx bone (plural = phalanges), named after the ancient Greek phalanx (a rectangular block of soldiers).

The thumb (pollex) is digit number 1 and has two phalanges, a proximal phalanx, and a distal phalanx bone.Digits 2 (index finger) through 5 (little finger) have three phalanges each, called the proximal, middle, and distal phalanx bones. An interphalangeal joint is one of the articulations between adjacent phalanges of the digits.