SEATTLE – A recently-released autopsy report shows Seattle police officers shot Charleena Lyles seven times and that the woman was 14 to 15 weeks pregnant when she died in June.

Police say the officers fired when Lyles lunged at one of them with one or two knives.

According to the Seattle Times, the report was released by a lawyer representing Lyles’ father, Charles Lyles. A spokesperson for the King County Medical Examiner’s office told CBS News’ Crimesider the office is not releasing the report, but said it rules the death a homicide.

The report also says the 30-year-old mother had no drugs or alcohol in her system during the June 18 incident with officers at her Northeast Seattle apartment, the paper reports.

The report shows three of the gunshots fired by officers Jason Anderson and Steven McNew hit Lyles in the front of the torso and chest, three struck her in the back of her arm and one grazed the side of her ribs. Three of her four children were home when she died.

The shooting is still under investigation.

According to the Seattle Times, Lyles had a history of mental health problems that appeared to get worse in the 18 months before her death. 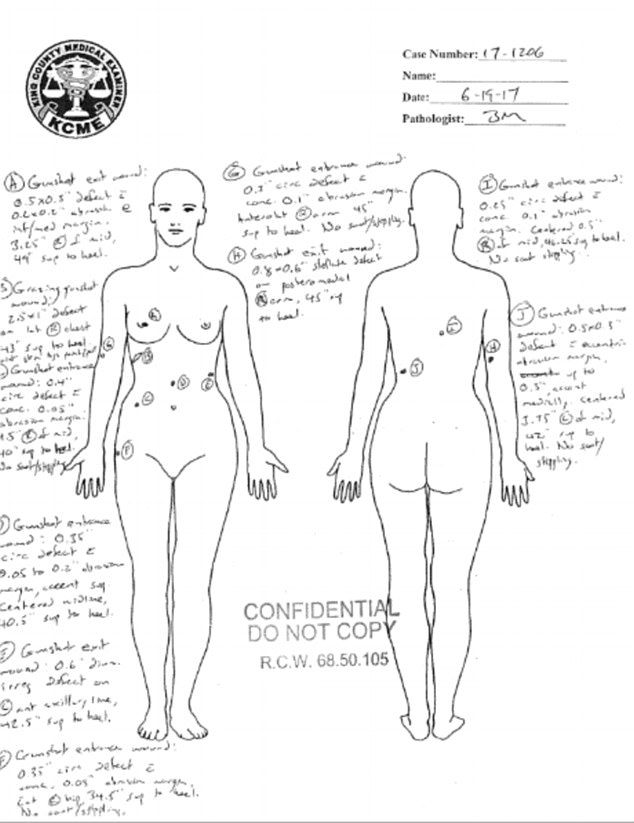 CBS affiliate KIRO reports that Lyles called police on a Sunday morning, reporting a burglary that included the theft of an Xbox. An audio recording indicates two officers spent about three minutes calmly speaking with Lyles, who later armed herself with two kitchen knives. Lyles had been ordered by a Seattle Mental Health Court judge to not possess weapons just weeks before the shooting.

Family members and attorneys question how police approached the incident when records showed Lyles had been struggling with mental health issues. Her family is reportedly preparing to file a civil rights and wrongful death lawsuit against the city.